How Can the Designer Keep a Creative Edge in a World of Corporate Projects?

There's no doubt about it—being a professional designer can be a very rewarding career path. But as an artist, constantly tuning all your creative energy into client work can leave you with some artistic static. Sometimes you have to break away from the results-driven corporate world and channel something fresh and different.

There are a few easy ways to amp up the creativity, from getting outside your comfort zone, viewing things from a new perspective, going on an artistic retreat, or joining an art collaborative. But to really get jamming? Well, what better way than to do a band poster? Here's how.

Find a band. Everyone has a friend or knows a friend of a friend who’s in a band. Bands always want to promote their next gig. Learn about them, listen to their music, check out their website, try to find out something funny or mildly embarrassing about them (but unlikely to inspire a lawsuit).

My friend’s brother is in a band called Alewife. What kind of music do they play? Here’s how they describe it.

Alewife begins with spiritual access to the lunar pull of tides and sand, fueled by the swinging equatorial sounds of Santo & Johnny, while slurping hungrily on a shot of adrenaline from the surf guitar wizardry of Ventures after they’d dosed on Hawaii Five-O . . . fill to the rim with ice, shake vigorously, and pour out a cool cocktail.”

With a bio like that, how can you not be creatively inspired?

Photo of Alewife performing at The Outta Space

Check out other band art and concert posters. Dive into your old album covers—I mean CD inserts—I mean Google it. Pinterest is full of samples.

Latch on to the visual style that works with the underlying band concept or vibe. In keeping with Alewife’s image I was looking for “a fermented blend of surf and sci-fi with a pinch of exotic melodies from around this vast global multicultural milieu. Heavily equatorial. Extraterrestrial and bizarre.”

Here’s what I was drawn to:

My theme: I wanted to illustrate “a beach party that’s gone wrong.”

Now that you’ve honed in on a theme, do a pencil sketch so you can run it by your client to get initial feedback. We take the same approach with projects at NeigerDesign—starting sketchbook first and then presenting initial concepts.

Concept board and initial pencil sketch of the Alewife band poster

Listen to client feedback. Make sure you're in a chord accord with one another. Here’s what the band had to say:

Yes, this beach gathering has gone horribly wrong. WHAT’S WRONG WITH YOU, DUDE?? I love it . . . You have complete artistic license. And don’t forget the drummer.”

Step 5: Turn Up the Volume

Once you have the go-ahead on the concept, move forward with the actual artwork. In my case this involved first inking the pencil sketch, scanning it and adding color in Photoshop to get to a final version as vibrant as it is awesomely weird. 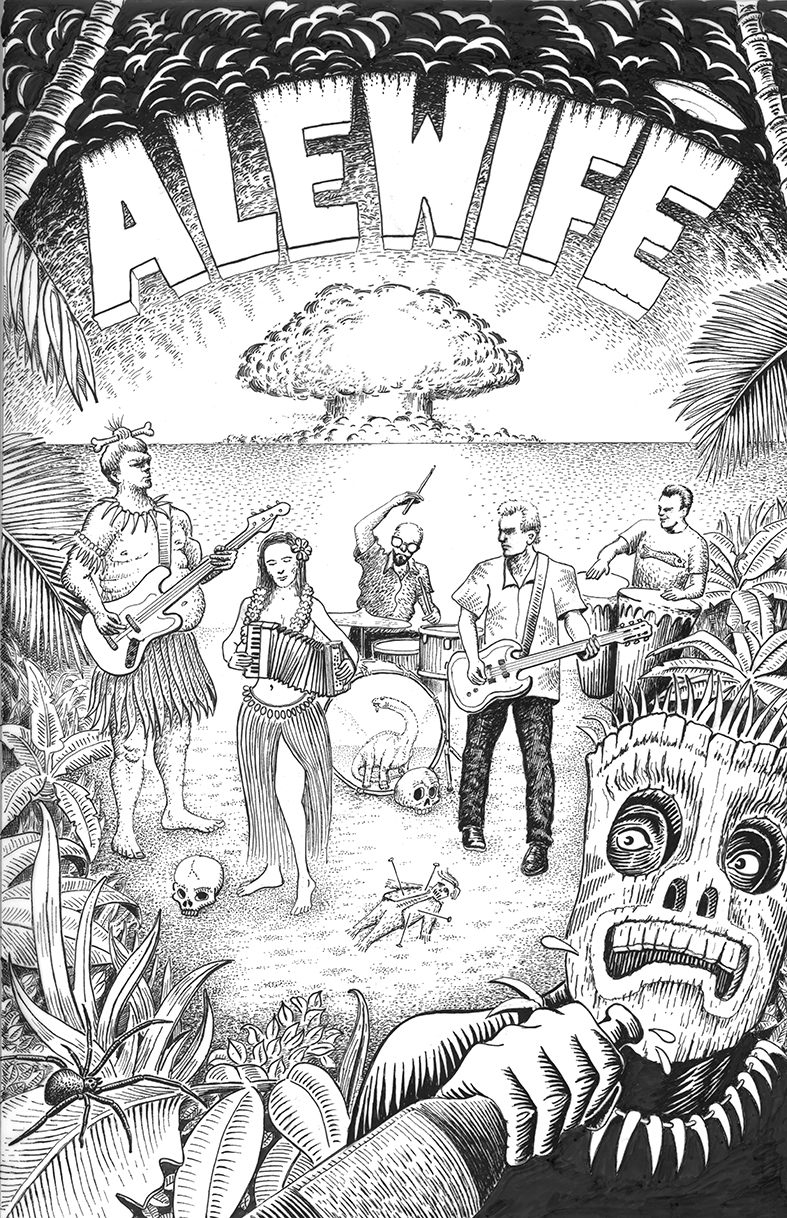 Inked version of the drawing for the Alewife band poster

Prepare for your encore—once the artwork is finished, all that's left is to deliver it to the client on time and within budget (if you actually had a budget). Then, sit back and enjoy the fruits of your creative labors by making sure you check out the band at the next gig. You’ll get to enjoy a rock status somewhere above a groupie or roadie, and probably even get a few free drinks out of it.

The finished poster art for an Alewife performance

Hopefully, you'll be feeling creatively refreshed and ready to tackle the next client project, even though it's sure to have less surf guitar. One last thing to keep in mind, however: you never know how your clients might be spending their weekends. That CFO you’re working with on the annual report might be rocking out with a death metal cover band every chance they get.