The city of Evanston is flourishing with many different types of businesses, from restaurants and small boutique shops to large finance and technology firms. It may or may not surprise you that behind many of these prospering businesses are incredibly hardworking women. Some of these women-owned companies have been operating for many years and some are just getting started, but they all have their own unique story.

Take NeigerDesign, founded by Carol Neiger, for example. Early in her career, Neiger was lucky enough to learn from some great mentors by working at various design firms and studios. While working at Slavin Associates for seven years, she gained management skills, branding design experience, and became more and more interested in the business of design. After having her first daughter, she was struggling to balance a demanding career, family, and leaving time to pursue her art. So she started her own business, and now—29 years later—NeigerDesign is just one of the many successful women-owned and operated businesses in Evanston, IL. 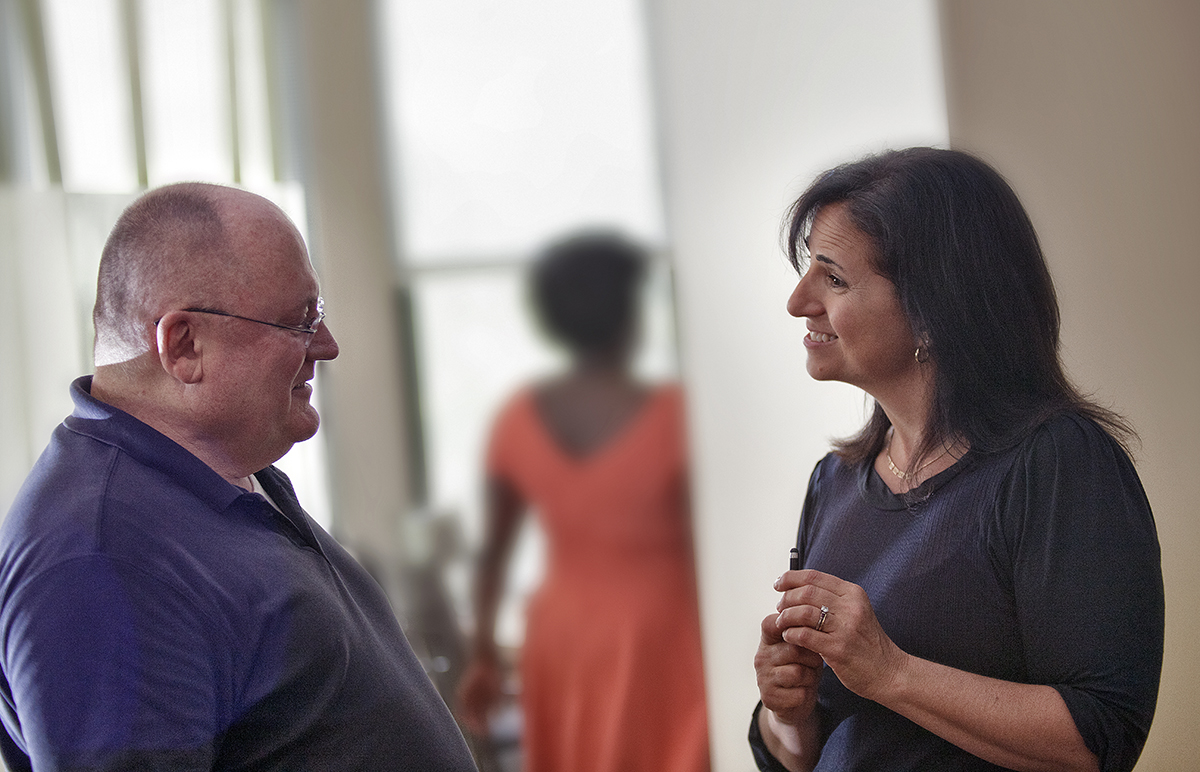 From the idea and inital planning to the actual creation of the business, it can be a long and difficult process. However, the journey may sometimes be a little different for a woman than a man, from the reasons why they started the business to the challenges faced while running it.

There are many different reasons as to why women start their own businesses.

Some were born to be entrepreneurs, like Linda Burtch of Burtch Works, an executive recruiting agency located in the Evanston Rotary building. Burtch recalls having an entrepreneurial spirit even as a young child. “I was doing lemonade stands but then decided everyone was doing that, so I started sewing and selling Barbie doll clothes. Huge margins!” she jokes. From a young age, she always wanted to work hard and find new ways to solve a problem. After working for well-known corporations such as Whirlpool and Pepsi, and then becoming a partner at a successful recruiting firm, she finally decided to start her own executive recruiting agency in 2009 with a focus in scientific quantitative sciences.

Similarly, Sara Jane Abbott of See Jane Sparkle knew what she wanted to do from a young age: “I have been a designer since I was a teenager. I still have the first pair of sparkly earrings that I designed when I was 14. I knew I was going to design and have a boutique someday.” That day came after going to fashion school and working for 17 years in the corporate world designing for everybody else. Since creating the See Jane Sparkle brand in 2001, Abbott did trunk shows for nine years in addition to her full-time job. “At one point I had 30 trunk shows per year, was working full time, had two kids, and thought ‘hmm maybe it's time to open the store.’” Determined to bring the starlet out in everyone, the boutique now offers jewelry designed by Sara Jane herself (including custom designs), vintage clothing, personal styling, and even private design parties called Beads & Bubbly. See Jane Sparkle is celebrating its 5th year anniversary next month.

For some, starting their own business was a matter of creating a balance between work and raising a family. In 1984, Valerie S. Kretchmer was working for a large real estate investment company and had just had a baby. Kretchmer explains, “I was working five days a week, doing quite a bit of traveling, and it was getting pretty stressful juggling it all.” She asked if she could work four days a week, but the answer she received was “No, we don't want to set a precedent.” So she asked if she could work 4 1/2 days a week, and again was told, “No, we don't want to set a precedent.” She thought to herself, “Okay, this is a good time for a change.” Kretchmer decided to go off on her own, and all these years later it has paid off. She is the founder of Valerie S. Kretchmer & Associates, a real estate and urban planning consulting firm in Evanston.

And for others, starting a company was at the request of the customers. Malik Turley, founder of the Hip Circle Empowerment Center, had been teaching different classes all over the city. She called together a focus group for marketing research. However, the main takeaway of the focus group was that the women wanted all of what she did to be in one place. The environment she was creating in her classes didn't necessarily match the environment of the spaces she was teaching in. Turley explains, “These women wanted one distinct place that conveyed what I was trying to communicate, which is: accepting who you are, moving your body, and getting in touch with your own skin. So they actually asked me to open up my own space, which never occurred to me. And I said, ‘Sure, I can do that!’” Thus, the Hip Circle Studio was born and turned into the non-profit, Hip Circle Empowerment Center, seven years later. Through dance, fitness, and community, the center empowers women and girls to believe that they are strong, beautiful, and worthy of attention.

But deciding to start the company is just half the battle. Once the business plan is in place, there are inevitable obstacles. Along with the typical challenges of starting and running a company, women business owners may also potentially face sexist problems like being taken seriously or raising equity. According to Forbes, women are only able to raise about 50% of the capital that men raise.

So how did these women overcome?

“I said hey buddy, move over.” (Well that's one way to do it.) As an industrial engineering student and subsequent engineer for Whirlpool, Linda Burtch recalls, “There were no women in engineering at the time. I was the only woman in my classes and workplace. But if men were dismissive, I just ignored it, did what I needed to do, and never apologized.”

Malik Turley says, “I have no patience for sexism. I don't entertain it. Finding myself in rooms full of men where I might have been discounted or dismissed, I don't give them the opoprtunity to do that. They can try to dismiss me all they like, but I'm still going to do what I set out to do.”

Similarly Rebecca Berneck, founder and CEO of Officeheads, explained, “I actually don’t let much slow me down when working to reach my goals, so I didn’t pay much attention to challenges that arose due to being a female business owner. I simply blasted through them like any other challenge.” Along with being the CEO of Officeheads, which provides remote bookkeeping, accounting, analysis and business coaching to owners of service businesses, Berneck has also served as the president of the Evanston Chamber of Commerce.

Not every female entrepreneur encounters sexism but the key takeaway is that if they do, they don't let it get in their way. They don't allow it to discourage or slow them down. After all, there is ceratinly no shortage of other things to worry about while running a business!

When asked if they had any advice for young aspiring female entrepreneurs, the overwhelmingly unanimous answer was to be passionate about whatever you decide to do.

Berneck says, “DO IT! DO IT NOW! If you have found your passion and know your market, there is no time like the present to JUMP on in!”

Likewise Sara Jane Abbott says, “Just do it. Don't think about it too much because there's always going to be ups and downs but if you're doing what you love, it doesn't feel like work. If you're following your passion, it always feels right.”

Speaking of following your passion, let's take Dr. Tari Mack for example. As a psychologist, she has helped countless female patients looking for love. Soon realizing this was a passion of hers, she decided to write a dating book in order to “help them understand how to stop repeating the same unsucessful patterns and actually find their partner.” Dr. Mack explains, “I work with SO many women searching for love and I see the obstacles that get in their way.” But the passionate entrepreneurship doesn't stop there. Along with writing a book in her spare time, she hosts various workshops on finding love, and has a blog: The Path of Joy.

But it's not enough to just be passionate.

“You have to find a way to monetize doing what you love,” says Cindy Levitt, founder of Peace by Piece professional organizing and design. And that's exactly what she did. As a naturally organized person, Levitt explains, “I always did organizing from the time I was a little kid. I can remember organizing my dolls and hanging them on the wall; always liking how things were arranged.” In 2006, she monetized her passion for “project managing people's lives” by starting her own professional organizing and design company.

The advice can be summed up with one quote: “Do what you love and the money will follow.”

Just be ready to work hard. It takes dedication and drive because nothing comes easy, but it's worth it.

Every woman business owner has her own story, challenges, and lessons learned. These were just a handful of them. See a list of other women-owned businesses in Evanston and Chicago in the Bossy Chicago directory.

NeigerDesign is a proud Women Business Enterprise (WBE) and a certified corporate member of the WBENC. The WBE “Women Owned” logo found on our website, as well as many other companies' websites across the country, has many benefits, including enabling prospective clients and consumers to identify products/services provided by companies that are owned and operated by women.

If you are a women-owned business that is seeking WBE certification, visit WBENC to learn more.